Yet they made the choice to leave this safe environment and to establish HortiNed. Why? Because entrepreneurial blood is thicker than water. Because they wanted to support their customers better and more thoroughly. They did not want their customers to blend into the crowd, they wanted to offer personal and decisive attention; to provide fast and short lines; to quickly respond to customer requests; and to be on standby for customers in the event of plans for beautiful, large construction project, or just the day-to-day things. Small deliveries, modernisation and custom solutions. This is important at HortiNed. To be on standby for every customer and for every problem. 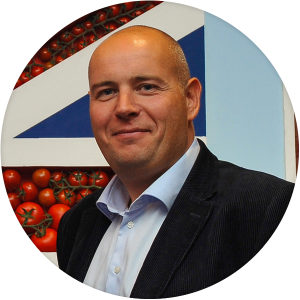 Richard van Dijk spent many years working at Van der Hoeven greenhouse construction. Following his studies at the Agricultural University of Delft, where he specialised in International Management, this gardener’s son worked with a horticultural consultancy bureau. After this, he spent many years with Van der Hoeven greenhouse construction, initially as an export representative. However, over the years Richard went on to become manager of the export department and a member of the MT.

Richard has been successful in several areas. He has travelled extensively as a sales representative for North America, and Eastern and Western Europe, and in recent years, he was mainly active in France and the UK. In these countries there is still a lot of direct contact with growers, which, given his background, suits Richard quite well. Collaborating in determining the customer’s problem and finding an appropriate and efficient solution is always Richard's objective, and in this way, he has made a significant contribution to a number of developments. For example, he co-developed the greenhouse with solar panels. More recently, Richard, together with Ron and Van der Hoeven greenhouse construction, developed the so-called ModulAir greenhouse, a semi-closed greenhouse concept.

The first ModulAir projects have already been built on different continents. This greenhouse concept, with its many advantages, will definitely play an important role in the international horticultural industry in the future.

The objective is to provide an appropriate technical solution that is commercially feasible and applicable in future projects.

After his HTS (Technical College) training, Ron spent his entire career in horticulture, in the field of climate and heating systems. After starting at Priva and Van der Wilk heating, he began a heating department at Horconex around 20 years ago. Where plants were previously purchased from third parties at Horconex, the engineering, planning, procurement and implementation were now done entirely in-house.

Over the years, as co-owner of the company Ron developed this department from a one-man business to a full heating department.

Two years ago, he decided to go in a different direction. Ron helped lay the groundwork of the development of the ModulAir climate system – a revolutionary solution for controlling, monitoring and optimising the greenhouse climate – at Van der Hoeven.

Ron also has a wealth of experience in mapping out, optimising and renovating existing heating projects. Ron's conscious choice to once again work within a relatively small organisation like HortiNed is rooted in his ambition to realise an optimum installation in close collaboration with the customer. Quality not quantity. Attention and short lines.